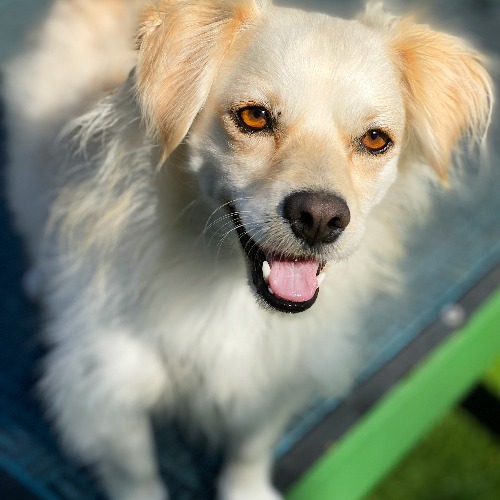 He is a mixed breed neutered male dog.  His color is called English Cream (off-white).  We think he is a mix of Pomeranian and some sort of Spaniel, probably King Charles Cavalier.  His age is uncertain because of his color, but he appears to be about 3 years old.

He will bark at other dogs that he meets when on leash, though.  It’s not hard to distract him and carry on your way, but you must be physically able to handle his leash during these outbursts.

Auggie gets upset when he is apart from his person.  This happens to dogs that have been abandoned too many times.  He definitely needs a home where he can learn to trust again.  Usually the anxiety of being alone decreases but there are no guarantees on this, either.  Unfortunately this was made even worse with a failed attempted adoption recently.  Auggie was too active for them.

His energy level is very high when there is excitement around him.  He can be intense at times and will need a home with a person who can be bossier than he is.  He definitely needs some training and a home where he won’t be allowed to “rule the roost” as they used to say.  He also needs time to trust his new environment so he can relax.

Auggie gets especially active in the car.  He tries to get to the driver seat.  We recommend that he wear a dog seat belt when in a car.

When things settle down, he settles down, too. He is a nice dog and a smart dog.  He appears to be housebroken but we are very careful about getting them out proactively and we don’t guarantee housebreaking.

We think stress is part of Auggie’s energy level.  We are looking for a home that will be active enough for him but also allow time for him to be quiet and settled so that his adrenaline can come down.