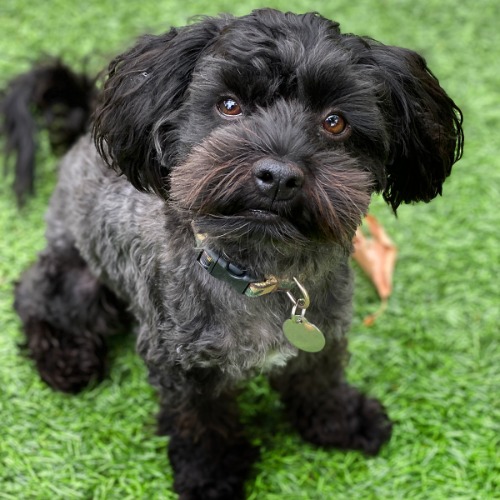 Scotty is a small, dark gray mixed breed. We don’t know what the exact mix is, but he doesn’t shed and “might be” hypoallergenic.  We think he is approximately 3 years old.  He can be a shy at first but then he is very friendly and affectionate. He likes to sit on laps but is also ready to chase a toy around the yard.  In the afternoons he likes to sit on a chair on the patio and relax.

He is a very good walking companion.  He trots along nicely on leash and doesn’t bark at other dogs nor people.

Scotty is mostly housebroken and will usually tell you when he needs to go outside.

He is healthy with the exception of a condition called "fly-biting seizures".  These aren’t actual seizures but that is the name that has stuck.  He has been examined by a neurologist where he received an MRI, a CT scan and a spinal tap.  The Dr. declared that he does not have epilepsy.  He reacts differently to certain stimulus by raising his head and biting at the air as if he is trying to catch an imaginary fly and then he will chew on his foot or his behind.  His primary trigger is sounds that he cannot locate the source of, so it's nearly impossible to avoid them.  It is easy to distract him from it most of the time.  If you don't interrupt the seizures, he may over heat and sometimes vomit.  We don't know what causes this nor what the long term affects will be.

The neurologist considers this condition to be a behavioral issue.  I disagree as that implies that it can be trained away.

Sounds are his triggers.  Any constant sound like a chain saw or even music will trigger his ‘episodes’.  We cannot turn off all sounds so we are allowing him time to get used to music and all of the reconstruction noises in our neighborhood.  We just distract him with a toy or some lap time and he stops.

Because of his episodes, he needs a home where he can be supervised 24/7.  Since he has not been alone in over a year, Scotty doesn't like to be left home alone.  He will scratch at the door.  Otherwise he's playful and sweet and is a very loving dog.