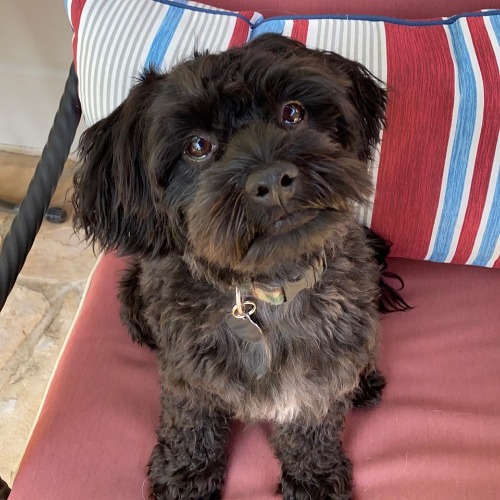 Scotty is a 10 lb  mixed breed appoximately 2 years old.  He appears to be a mix of either Maltese, poodle and/or possibly Scottish Terrier.  He can be a smidge shy at first but then he is very friendly and affectionate.

We recently discovered that he has a condition called "fly-biting seizures".  He has been examined by a neurologist and the Dr. declared that he does not have epilepsy.  He reacts differently to certain stimulus by raising his head and biting at the air as if he was trying to catch an imaginary fly and then he will chew on his foot or his behind.  His primary trigger is sounds he cannot locate so it's nearly impossible to avoid them.  It is easy to distract him from it most of the time.  If you don't interrupt the seizures, he will over heat and vomit.  We don't know what causes this nor what the long term affects will be.

Because of his seizures, he needs a home where he can be supervised 24/7.  Since he has not been alone in over a year, Scotty doesn't like to be left home alone.  He will scream and scratch at the door.  Otherwise he's playful and sweet and is a very loving dog. If you live within 75 miles of our location in Malibu, please fill out our online application at www.samsimonfoundation.org.